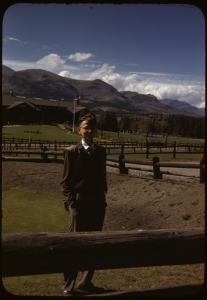 The wilderness of our National Parks inspires me, touching deep emotions where no other vistas can travel, but don’t forget to pack your camera.

This summer I travel by the Empire Builder Amtrak train to Glacier National Park and by ferry boat to Isle Royale National Park. Glacier Park is an old friend that I’ve passed though several times as a child and adult on train trips to the west coast. Isle Royale is located on an island in the middle of Lake Superior, one of the Great Lakes, only accessible by boat or seaplane.

Glacier Park and Railway
My father, the late Martin J. Walsh Jr., posed for a photo in front of Glacier Park Lodge as a young man in 1948.   I tried to recreate a portrait similar to my father’s photos taken on Kodachrome slide film, mine with an iPhone. There is sunlight streaming down from the sky in my photo, by it’s nothing in comparison to my father’s photo in his dapper traveling clothing.

Patricia McWilliams from Texas  was very kind to take the photo of me with my iPhone.  View photo posted at Instagram. 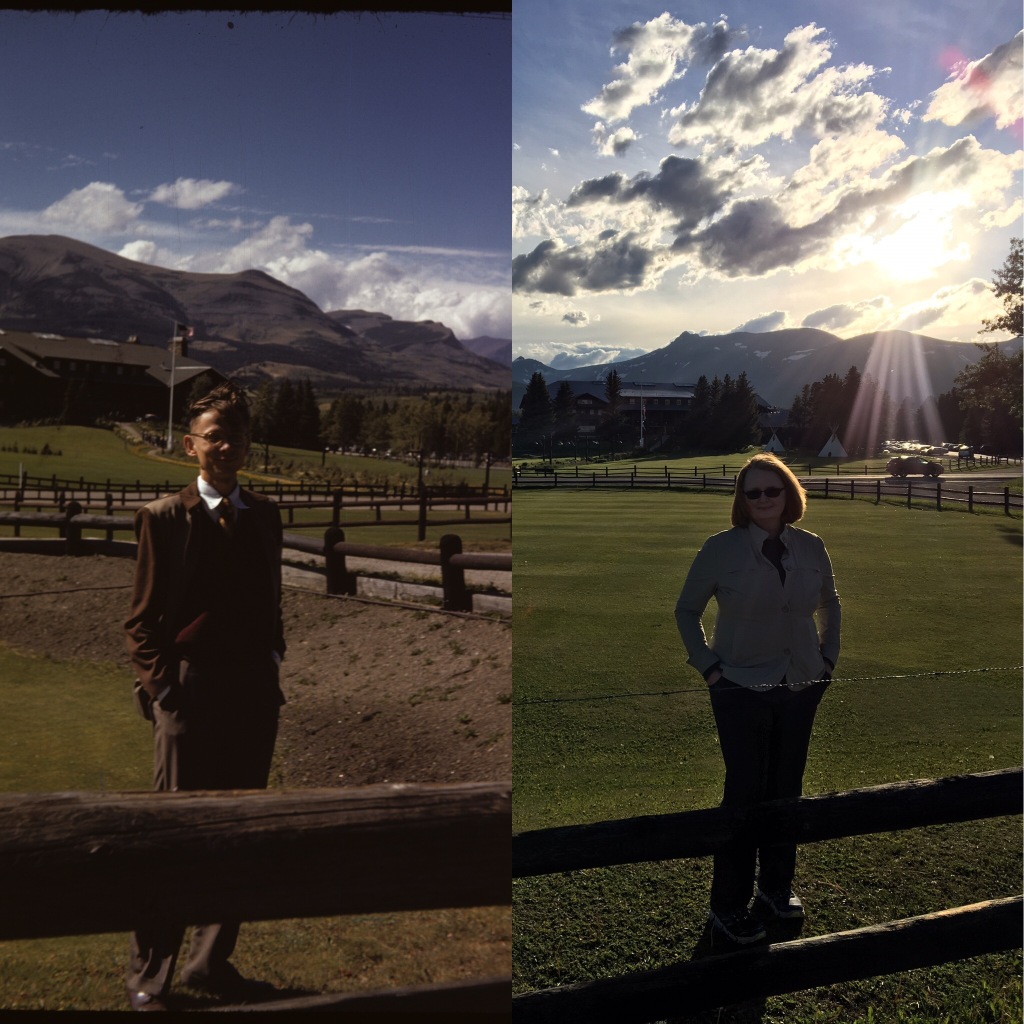 The photo on the left is my late father Martin J. Walsh Jr., in 1948, taken with Kodachrome. I’m on the right, photo taken with an iPhone 6s. Glacier Park, East Glacier, Montana. 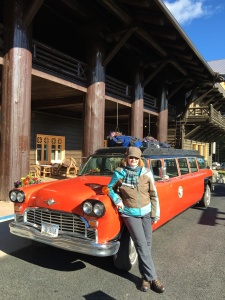 Visiting Glacier National Park in Montana I was overcome with the beauty of the mountains, lakes and the famous Going-to-the-Sun Road to Logan Pass. I had the opportunity to travel by way of the historic Red Buses on the first day the snow was removed to Logan Pass, June 17.  Driver Ben Cabutage, known as a jammer,  said we were the second Red Bus, circa 1938, to pass over Logan Pass from our direction for the season.

I travelled to Many Glacier on the shores of Swiftcurrent Lake, visited the lodge built by the Great Northern Railway, also Glacier Park Lodge and MacDonald Lodge. The history of the historic lodges, combined with the landscape was breathtaking.

On a special note, my father worked for the Great Northern Railway, then retired out from the Burlington Northern Railway. The slogan “See America First” was used by the railway to promote travel by train in the United States. I think it’s still is important to see our country, but also the world, especially important to visit our National Parks, owned by the citizens of the United States, for by all people and all times. 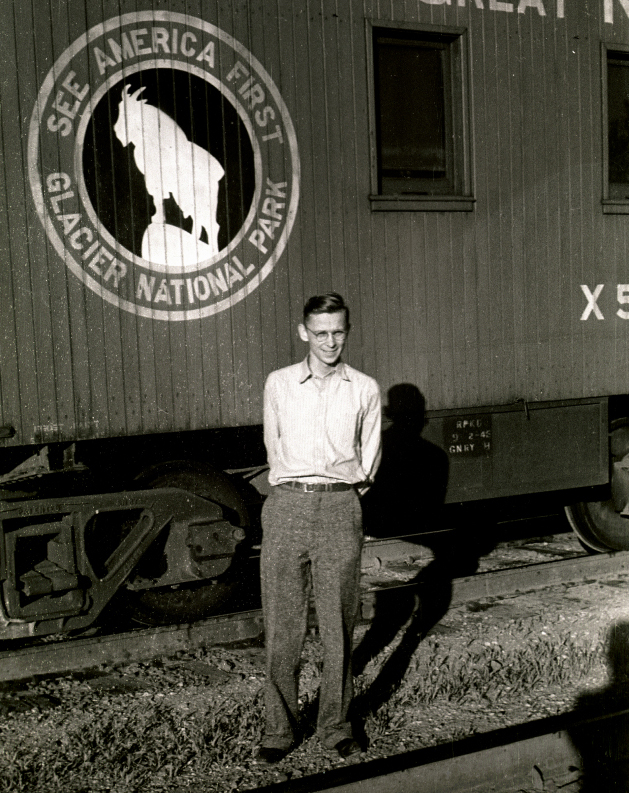 Exploration Grandeur
I vacated my life in Minnesota for a week in June, traveled by Amtrak, the Empire Builder from St. Cloud, Minnesota, only to be reminded there is so much more beyond daily life.

Viewing the Dancing Lady Mountain at Glacier Park was so easy to become overwhelmed with the strength and beauty of the mountain range, almost like being hypnotized by nature, yet needing to be respected and explored.

I remember talking to someone at Many Glaciers region at Glacier Park, on the shores of Swiftcurrent Lake.  I said something like, “There is no possible way you can’t be inspired by this beauty.” 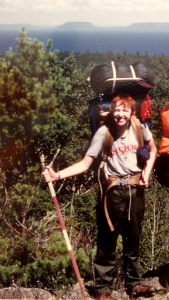 I first heard about this island wilderness when I was about 12 years old and my brother Paul M. Walsh was getting ready for a backpack trip, spending an entire year preparing for his adventure, summers of 1976 to 1977. Decades passed from first learning about Isle Royale, but I finally made the trip on the Voyageur II ferry.

My brother Paul was busy recording his backpacking trip likely with a Kodak Instamatic camera as a teenager.  Paul told me, “I remember most the fox following us down the trails, the fire tower and swimming in Lake Superior.”

This was the year I made it to the remote national park, enduring the rough Lake Superior waves, but spent almost the entire two and half hour ride sleeping. From the moment I arrived, found my campsite near the Windigo Ranger Station, I was overwhelmed with the flora and fauna of the island.

A ranger at Isle Royale told me the Pink Lady Slipper season was over, but fellow camper told me exactly where to search on the Feldtmann Ridge Trail, just over a mile from the ranger station in Windigo, the closest location to Minnesota by ferry.

I was propelled like a magnet to the Pink Lady Slipper, also called Moccasin Slipper as it looks like tiny slipper or moccasin.   It started to rain as I traversed the roughed trail of narrow wooden bridges, rocks and tree roots. Donning my rain gear, I found the lovely Pink Lady Slipper, covered in a fresh coating of rain water.  My timing was absolutely perfect.

My campsite at Washington Creek was nothing less than a wilderness adventure park. Moose were busy early and late at night swimming past my campsite enjoying the fine vegetation of the creek. I photographed four cow moose, but no bull moose, they have the notable antlers. The moose followed the flow of the creek to Lake Superior, and I ventured on to the trails created by the moose and was able to capture incredible video of the moose, likely on 20 or so feet away.

Sketching
I did just a few ink sketches at Isle Royale, seeming to be overwhelmed with taking photo and video. At one point, I tried to do action sketches of the moose eating and swimming, mainly with their heads submerged in the creek, busy eating. I left my watercolor paints back at the campsite during my day hikes as the moisture in the air from Lake Superior made the drying time too long.

Taking a hike
During my six day stay on Isle Royale, I walked 22 miles on the trails around Windigo, near Washington Harbor. On a day hike to search for the Blue Flag Iris, near the Huginnin Cove Loop Trail and Windigo Trail, walking more than six miles round trip, I turned around as I could not find the iris. When I gave up my search for the iris I found myself, as it appeared to me, under a majestic covered canopy of trees, with a thick forest ceiling, rays of light on the ground and hitting my face as I hiked with backpack and trekking poles. I was at this point overwhelmed with emotion, crying, simply from the beauty. I search for an flower, but simply found the beauty of the forest as my hiking reward.

The lesson in search for the iris may be better said to always be aware of your surrounding while pursing your goal. The opportunities are more than can be imagined.

I’ve been home about one week from my Isle Royale National Park Trip. My tent, sleeping bag, outdoors clothing and gear are slowly being cleaned and stored away for my next adventure.

My wilderness adventures to our National Parks inspired me, touching emotions of my mind, body and soul. Now it’s your turn to find your portal to wilderness!